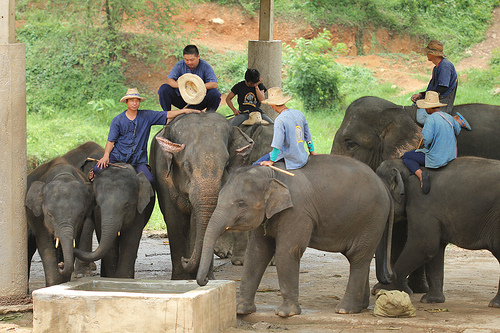 Mae Taeng Elephant Park currently employ around 300 staff and mahouts, around 90% of these are from Thai Yai, Karen or Burmese hill tribes. Mae Taeng assists their indigenous employees by aiding them in their visa and work permit applications; they then send them to a mandatory 3 month mahout training course at the famous Lampang Elephant Conservation Centre. The centre in Lampang teaches the mahouts how to control the elephants without hitting or shouting. Many of the mahouts have come from cultures where hitting elephants is acceptable, but Mae Taeng’s zero tolerance to elephant abuse means that training is essential to eliminate this issue.

Employing Hill Tribe mahouts is a major part of the Mae Taeng project, considering how these people live in harmony with nature, believing there to be spirits in the trees and rocks as well as worshiping the “lord of land and water”. The ideas of these mahouts fit in well with the Mae Taeng Elephant Park ideology. Mae Taeng Elephant Park remains committed to their extended family as much today as they did when they first opened their gates. This is all part of their philosophy- to give back to the community and to the environment.

About the Mahout Tribes.

The majority of the mahouts come from tribal descent. Mae Taeng Elephant Park is dominated by 3 culturally diverse tribes, The Thai Yai, The Karen and Burmese Hill Tribes. The Thai Yai, who are actually from Chinese descent have been in Thailand for centuries. Their main form of employment throughout the years has been farming, a role they still play in society today. They are devout Buddhists with some of the most elaborate religious celebrations in South East Asia. The Karen are the most prominent mahout tribe, in fact they and the Hmong are the most prominent in Thailand. The Karen tribe is known as the “long neck tribe”, due to their elaborate jewelry, which gives the illusion of long necks. The Karen are not actually Buddhist, but animist in faith. The Burmese tribes are another prominent mahout tribe, they come from the Burmese border where they face political alienation and adverse poverty. Mae Taeng aids them in giving them a place to stay and work along with training and all relevant working documents.

Culture of Mahouts and Employees

It’s important that the tribes and mahouts manage to maintain their identity within Mae Taeng Elephant Camp, this although a romanticised notion is often a cause of frustration to the owners, as the employees vanish for weeks for different festivals and celebrations. The majority of the mahouts and workers in Mae Taeng are related, which adds to the family atmosphere as well as keeping the specialist art-form of the mahout alive. Good mahouts have became extremely hard to find, especially with the ever growing influence of western culture in South East Asia, many potential mahouts would simply prefer to work in offices in the city, rather than in the hills with elephants.

The mahouts are the key to this whole project, they virtually live with elephants, spending most of their time in their company- they form a close bond with these wonderful creatures and which over years leads to genuine friendship.

The art of the mahout is deeply rooted in Thai culture and traditionally been a familial heritage passed down generation to generation. Mae Taeng is no different: David, who is Suda’s mahout, is the son of Orachai’s mahout. Both of them are highly skilled, compassionate employees who feel a great attachment and responsibility towards the elephants.