Arts by Elephants provide one of the the best resources for Asian Elephant Facts and Information. We work with the elephants directly and take a great deal of interest in their development and progress. We use this page on elephant facts to inform people about elephants importance in Thai culture. 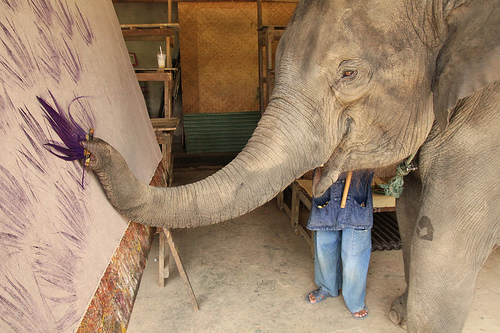 Asian Elephant Facts about their Size:

In Thailand the elephant is held in prestigious regard, it is a sacred animal that was mounted for battle and used for integral industries like agriculture and logging. In Thailand there is a proverb that a marriage is like an elephant: the husband is the front legs’, providing the direction and the wife is back legs providing the power.

Asian Elephant Facts about their Tusks:

•    Elephant Tusks are used for digging for salt, water and rocks they are also used for debarking trees and uncommonly as a weapon.
•    Like human hands and feet, elephants are known to be left or right tusked.
•    Females don’t have prominent tusk, although they do have them, usually seen when they open their mouth they are referred to as “tushes”.

There is a decorative element to tusks which are used to attract females.

Elephant Facts about their Status:

•    Elephants are recognized as the official animal of Thailand
•    The previous Thai flag had a picture of an elephant on it.
•    At the start of the 20th century there were 100,000 elephants residing in Thailand.
•    Elephants are called “Chang” in Thai. They have a drinks company and even a letter in the alphabet named after them.

Elephants are sacred animals in Thailand so a special elephant day was designated by the government cabinet, celebrated annually on March 13th it was brought in a decade after logging was made officially illegal.

Asian Elephant Facts on their Intelligence

Aristotle once said: “The elephant surpasses all other animals in mind and wit.”

Elephants are reported to go to safer ground during natural disasters like tsunamis and earthquakes. There are video’s of elephants and other animals going to higher ground prior to the tsunami that hit Thailand in 2004.

Since 1986 the Asian Elephant has been registered as an endangered species, with population decreasing by 50% in the past 3 generations. They’re constantly threatened by habitat loss, fragmentation and dehydration as well other threats such as illegal poaching and the perils of illegal logging.

Today, nearly 300 elephants still beg on the streets of Bangkok, a booming metropolis. By day, mahouts hide the elephants outside of town. At night, elephants plod along crowded freeways to get to tourism central. This is a tragic set of circumstances I am sure you’ll agree.

At Mae Taeng elephants are taken away from situation like these, it is Mae Taengs aim to eventually be self sustaining and fully conservation orientated so that the elephants no longer have to do perceived “circus acts” for entertainment. The harsh reality is that elephants are extremely expensive to feed and look after; most of these elephants have been taken from illegal logging or street begging- their life in this park is far superior to the life they would have anywhere else.

An internationally renowned expert of the Asian elephant, Dr Richard Lair, acknowledges that as much as we’d love to just release these animals into the wild, it’s not feasible for a number of reasons: There is not enough space in Thailand or anywhere in south or Southeast Asia for release. This combined with the fact that many of the elephants are virtually domesticated, they rely on the work of Mae Taeng and similar innovative projects to survive, and those elephants that would survive in the wild would be massacred quickly for their tusks