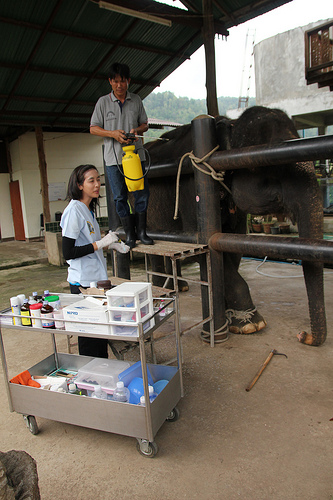 The Elephant Camp in Mae Taeng employ employ indigenous Thai people from several tribes across Northern Thailand. Our project is delighted to support such a wonderful cause, directly aiding these people. We provide information on the 3 main tribes employed at Mae Taeng Elephant Camp and look at the newly built clinic, which gives free health care to elephants across the region.

Thai Yai: These hill peoples are descendants of a powerful group that had founded in China in around the 7th century. They moved between Thailand and Burma for several centuries before settling in 1831, as the “Mae Hong Son”, today they are known as Tai Yai, or “big Thai”. This group make up the majority of the Elephant Camp employees.

The variety of temperatures in Northern Thailand attracted the Tai, as it is very conducive to farming: the winter is cold enough to produce delicate green vegetables and the summer is hot enough to grow rice, there are heavy rains all year round which aids in yielding good crops. Around half the Thai Yai are still farmers today, predominantly producing rice and garlic.

The Tai are and always have been traditional Theravada Buddhists, a style of Buddhism heavily influenced by Burmese Buddhist. Tai sons are trained in the eight fold path of Buddhism at a very young age to help ensure social harmony, self-sufficiency, and a balance with nature.

The religious beliefs of the group are deeply rooted in their society, the elaborate festivals and traditions they conduct each year are of great importance to their way of life. To this day the Tai perform some of the most colourful and visually beautiful Buddhist festivals in all of Thailand. In fact, many of the Tai religious celebrations like the 3 day long Poi Sang Long festival have become major tourist attractions. Mae Taeng Elephant Camp is a fantastic blend of cultures and beliefs.

The Karen along with Hmong are among the most prominent tribes people in Thailand this prominence is reflected at the elephant camp, they moved into Thailand in around the 7th century, and are famous for terraced rice farming, hand woven garments and their decorative long necks.

The Karen villages tend to cluster, with around 25 raised houses in each settlement. Each household consists of the parents and their unmarried children. Married daughters and their families may also live in the same house. The highest authority is the village priest who runs the village along with the elders.

The majority of Karen are Animist in faith, they believe that non-human entities are spiritual beings, or at least embody some kind of life-principle. Animism encompasses the beliefs that there is no separation between the spiritual and physical world, and souls or spirits exist, not only in humans, but also in all other animals, plants, rocks, geographic features such as mountains or rivers, or other entities of the natural environment.

In cultures which practice animism, there are often a lot of festivals, feasts, and celebrations. Each festival is designed to cater to a specific deity, keeping his or her soul happy and content so that the people of the tribe will remain blessed and healthy. Some festivals may also be conducted to bring about a change; a festival might ask for rain or fertility. There is a misconception that attributes Animism to primitive cultures, when in fact the concept of Animism is ancient and undoubtedly gave birth to today’s mainstream religions.

It seems employing people from Karen tribe fits well with the ethos of Mae Taeng Elephant Camp. Considering the Karen have rituals to live harmoniously with the “Lord of the Land and Water” as well as believing there are natural spirits within the rocks, mountains and tree’s that surround them.

There are a variety of different Burmese hill tribes that reside in North Thailand, the Padung, the Lisu and the Akha. These hill tribes have moved into the region due to hardships in their homeland, civil unrest, deforestation, road building and poverty are just some of the reasons. Sadly, life isn’t easy for these people even across the border in Thailand, the harsh reality of the situation is that most of these hill tribes have been marginalised and live in abject poverty. Few of them are officially recognised by the Thai authorities and they exist without any ID cards or rights. Mae Taeng Elephant Camp project benefits these people by providing them with the required working documentation, money and security. Without the support of Mae Taeng Elephant Camp many of the Burmese tribes would have no hope.

The tribe’s people’s staple employment is usually as subsistence farmers, who grow vegetables and rice on the mountainsides and raise pigs and chickens. The men often work in surrounding rice and tobacco fields, starting early in the morning and continuing until the last light. They receive about 100 baht per day ($2), which is considerably less than the national minimum wage. Their villages are often in remote locations and can be difficult to reach leading to them seldom leaving their immediate area. Running water is still not available to all of the tribes so women are sometimes charged with the task of filling up large containers from a nearby well several times a day. A few villages have been fortunate enough to be electrified resulting in a marked improvement in living conditions. Entire families live in a simple houses constructed from bamboo and grass.

Missionary groups operating in the area have also increased problems of a religious nature. Their assistance is often dependent on certain conditions as they try to convert these people to Christianity. Their methods are controversial, although the missionaries would say that they can help to improve their living conditions and future opportunities.

Questionable practices such as removing children from their family homes to give them a more civilized upbringing, has led to much criticism. The religion of these tribal people is closely tied to Animism, with a strong focus on honoring ancestors and their parents, and a belief in both good and bad spirits. The presence of certain Christian groups has led to an erosion of their unique and fascinating culture.

Along with the highly skilled mahouts and helpers around the camp; the opening of the Elephant Camp Clinic in March 2006, led to the employment of a full time veterinarian, “Im” and her assistant “Joy”. Prior to the opening of this clinic, Elephants had to make a 150 kilometre journey to receive treatment. The Mae Taeng Elephant Camp clinic treats 100’s of elephants, as well as saving the lives of a dozen or so calves every year.

Im explains that it is not always easy to treat elephants; as they are wild animals their instinct is to subdue any sign of weakness, for this reason it is often very hard to tell if they are sick, or when it is apparent Im is often too late to treat them. Due to the close bond between the mahouts and their elephants, they are first to realise when their elephant is sick. For this reason Im relies heavily on the mahouts to inform her before an ailment gets too serious.

Im is in control of the breeding programme and the herd currently gives birth to around 2 elephants a year. She is also in control of the food management programme which is a huge task considering how much food they consume. Food acts as one of the main instigators of ill health for elephants, due to unclean food or poisons in pesticides- hopefully now with Mae Taeng Elephant Camp growing their own crops this will be marginalised. Im admits that before she worked at Mae Taeng Elephant Camp she actually wanted a pet elephant, but due to the large amount of attention they require she would much rather just work with them now.

The elephant camp clinic treats about 3 elephants a week, which is a huge number considering that elephants can take weeks to treat fully- her clinic provides free medical assistance to about 500 elephants from the region, so there is always an elephant needing her care- she and her helper joy are kept very busy. She calculates that around 30,000 baht is spent per month on drugs and treatments alone. Although the work is hard Im is grateful that such excellent facilities are available to her. The clinic was built, maintained and facilitated by money raised from art by elephants.